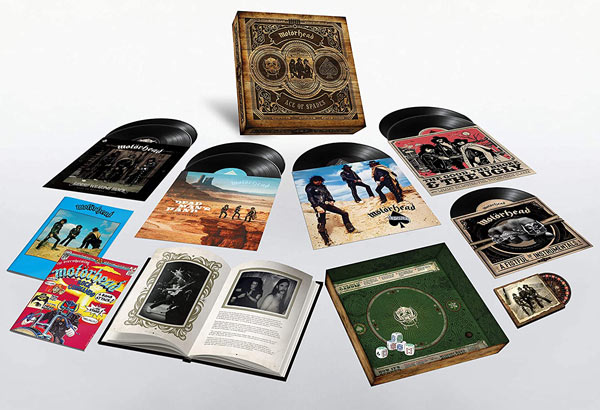 What we have here is the mammoth 40th anniversary release of one of the most iconic albums of all time, and arguably, the best Motorhead album, Ace of Spades. The thought that this would be as amazing of a collection is hard to fathom, but it truly is a work of art.

You get the Ace Of Spades album on vinyl, half-speed mastered and created from the original master tapes, two double-live albums of previously unheard concerts from the Ace Up Your Sleeve tour, a 10” EP of previously unreleased, instrumental tracks from 1980, a double album of B-sides, outtakes and rare tracks, a DVD compilation of rare TV appearances from 1980-81, a live concert from 1981 and a 5.1 audio mix of the original album, plus a 40 page book telling the story of Ace Of Spades through previously unpublished interviews with the people that were there, a reproduction Ace Up Your Sleeve tour program, a reproduction Motörhead Rock Commando comic, and a set of 5 poker dice that can be played on the game board inside the box set lid. Holy hell…what a collection of awesome!

Starting with the original album, you can hear the cleaned up, and louder sounding tracks that are now even more ear-blistering than before. You wouldn’t think that this would make a difference, but it truly has. The blood, sweat and tears that this band put into this album has never sounded this intense and will bring an extra head bang out of you. The two live albums are just a terrific addition to the set, with the new at the time songs, mixed with older tracks becoming head crushing and both hold up to the awesome No Sleep Till Hammersmith album. Although recorded on the same tour, they are both a welcome addition to the live collection of albums that they have recorded. The instrumental tracks and the B-sides, outtakes and rare tracks are a fantastic dip into some stuff that you might not have heard too much before and really show that they were trying to find some cool stuff to give the fans. Hearing Motorhead without vocals is a different experience and the addition of the St. Valentine’s Day Massacre EP is always great to have. The alternate takes of songs that you know so well are also very interesting to see where they started from and what the final mix became.

Jumping from the music, into the other items included is also a lot of fun. The DVD compilation of rare TV appearances from 1980-81, a live concert from 1981 and a 5.1 audio mix of the original album is a nice thing to include. The TV appearances are always a treat since you can tell they really were having a lot of fun doing them, and the concert is something that you will love to watch to be able to see the classic band all together and ripping the songs out. The 5.1 audio mix is also nice for those with that set up; it really immerses you into the inferno of the album.

The 40 page book telling the story of Ace Of Spades through previously unpublished interviews with the people that were there, a reproduction Ace Up Your Sleeve tour program, a reproduction Motörhead Rock Commando comic, and a set of 5 poker dice that can be played on the game board inside the box set lid are really cool and I devoured the book, finding out a lot that I didn’t already know. The tour program and comic were interesting to see since I never had these items in my collection before, and the dice and game are a great added bonus. I also really liked the cardboard replica bullet belt that wrapped around the box set…so cool!

With the band having all passed away, this is a fantastic way to remember them and enjoy an album that has held up and gotten better through the years. The only complaint is that I would have liked a download code for the music, but I’m still happy that this is out there; giving the fans something worthwhile from a band that is just as classic as this album. Long Live Motorhead!