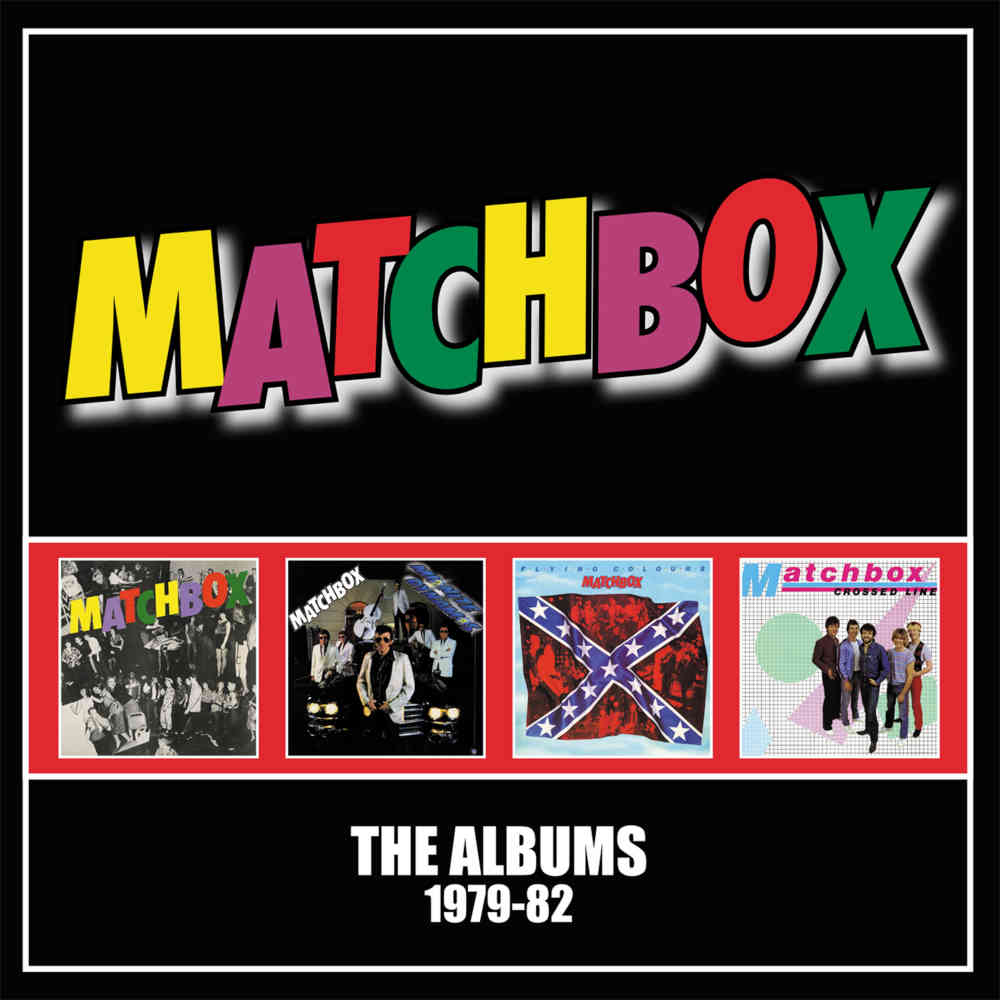 Matchbox was formed in Middlesex, in 1971 playing their rockabilly revival music and have been putting out albums and touring right up until the present. The band appeared in the 1980 film Blue Suede Shoes which detailed the revival of 1950s rock ‘n’ roll music scene at the time. Eventually, time and changing tastes meant the hits stopped coming and the various members went off to do other projects. Then, back in 1996, as the rockabilly and rock’n’roll scenes saw another surge of interest, these five guys got back together again to do a couple of shows, and now, the original band is back touring. This is a 65 track 4 CD box set rounding up all of the band’s recordings for Magnet Records between 1979 and 1982.

Being a lover of rockabilly and not owning any of their albums, this is a perfect way for me to get into the band with their original albums and go from there. They started off kicking and screaming right out of the gate with energy and a thrilling sound that will draw you in. Real rockabilly that quickens your heart and fills you with the desire to get up and dance. Disc one is their self-titled debut for the label which reached No. 44 in the UK chart. It contains the hit singles “Rockabilly Rebel” (No.18) and “Buzz Buzz A Diddle It’”(No.22) as well as the non-charting “Black Slacks.” These are great songs that show that they can write catchy songs that still sound great after all these years. The album now comes with four bonus tracks including two recorded under the name of Cyclone. The second disc is 1980’s Midnite Dynamos album which reached No.23 in the British charts. The title track gave the band a No.14 hit single and the album also includes the No.4 smash “When You Ask About Love.” This album continues the wild ride of the first album and you can see the band getting tighter and the writing getting better. The eight bonus cuts include the No.15 hit “Over The Rainbow/You Belong To Me” as well as two ultra-rare Japanese only singles, “I’m A Lover Man” and “Little Lonely Girl.” Disc 3 is the Flying Colours album which contained the hit singles “Babe’s In The Wood” (No.46) and “Love’s Made A Fool Of You” (No.63).  Buddy Holly’s “Love’s Made A Fool Of You” is a great cover that doesn’t mimic the original, they give it the respect it’s due, but make it their own, and then do the same to Holly’s “You’re The One.” Another winner of an album. The final disc is the 1982 LP Crossed Line, released here on CD for the first time. It features the No.63 hit single “One More Saturday Night” plus their collaboration with the late Kirsty MacColl on “I Want Out.” This album sees the band continuing their progression into one of the finest rockabilly bands around and should have got them more popular around the world since others like the Stray Cats came along and stole the spotlight away from them.

Housed in a sturdy clamshell box, each disc comes in a card wallet depicting the original LP art on the front. The 20-page booklet comes complete with in-depth liner notes plus pictures of all relevant singles sleeves and memorabilia. So, as you can see, this is not only a top-notch collection with bonus tracks and a great booklet but a great bunch of songs from a band that deserves to be heard and played over and over again. This is the kind of compilations that truly showcase a band and gives the listener a true taste of what was going on for the band back then and lets you dig deep into the great music.