The concert in Harker Heights was at a bar however it was an outside venue and was brutally hot and humid that day. The concert had starting times for either 6 or 6:30 pm depending on the websites you were looking at, so I got there around 6:30 pm. With the uncertainty of the start time, I was hungry and stopped to eat some Mexican food and 99 cent margaritas and missed the first band. It was the down time between the first band The Kings Of The Air which I missed and Tame Fury when I arrived. While waiting for Tame fury to come onto the stage, I walked around to see how the crowd was, it was a small crowd with most of the people there to see Within Reason and main attraction Hinder.

I made my way to the back near the bar so I could have a full view of the crowd and the stage. When it was time for Tame Fury to come onto the stage the crowd was unimpressed by them since they were there for Hinder and Within Reason. Tame Fury came on like being on stage was normal for them. I had only heard their music the day before and I was surprisingly impressed by what I heard online. When the music started to play, I was completely blown away, they had a superb sound that’s like another world between hearing them online and seeing them live. It was high energy, bold, loud, with clear vocals, and a tight sound overall, such amazing talent from a band that just started in 2014. The guys from Tame Fury aren’t flashy, showy, and they don’t need to be, oh no, they had the sound and the lyrics to make up big time for the lack of movement onstage from the heat. While Michael Mcvey was on vocals doing a great job of singing crystal clear and powerfully; drummer Phred Williams was in the background doing his own little show of throwing and spinning his sticks in time with the beats. The sound is rich, full, and engulfs you into a trance of pure bliss. The melody and beats weren’t all over the place or messy and they kept great time and hitting their marks. Erick Villareals, Brandon Williams, Mark Bankston did a wonderful job backing up Michael. The guys did a bunch of tracks, “Leave It All Behind,” “Brainwashed,” “Masquerade,” “Red Carpet,” “Fallen,” “Gift Of Life,” and “Black As The Fire.” Unfortunately, the crowd wasn’t really giving them love so Michael was trying to convince the crowd to give them some love. I did but I was in the back and they couldn’t hear me. Tame Fury is making a name for themselves by bringing a unique sound, image and attitude and presence to a versed crowd, from the older generation to the younger crowd. I cannot make this review solely about them, but they have a new album coming out and I will be able to review that.

The next band after Tame Fury is another recent band, Trine. Trine is a trio from Austin, Texas. The band members are Deuce Wanier, Ryan Hegefeld, and Jon Yadon Jr. Trine is a very new band so I don’t know too much about them. They had a whole different act than Tame Fury, the energy is different, the sound, everything, perhaps age is a factor. Trine is more alt rock sounding and it’s in your face, bold, bad boy attitude, and slightly raw power comes from it. The sound is rich and full and just engulfs the listener. It was still daylight when Trine hit the stage but the sun was slowly setting so the lights and the smoke from the stage were more visible. The way the lights were flashing just emphases the beat and the overall sound, and unfortunately the mics and the instruments weren’t doing so well in the Texas heat and humidity so I didn’t truly appreciate their sound as much as I could have, but I did notice they had a sound all their own. Their sound is fresh, new, and all ages and generations could easily appreciate their sound and energy.
After Trine had left the stage the sun was setting and shortly after the stage was all lit up and the smoke was really going when Within Reason hit the stage.

Within Reason consists of Chris Dow, David Koone, and Griffin Zarbourgh. The guys did a few songs from their long list of tracks. Unfortunately, the heat was messing with the sound as well for the guys. However, I did get a decent idea of their sound. They did perform some new tracks from their new album, and the vocals were good, smooth, and not as rough around the edges as I had thought since their sound was smooth, not as rough and edgy as their looks, but all in all it’s not bad at all, just a little unexpected. The band has been around since 2005, their style is leaning on the alternative side of rock which works very well for them. The lights and sounds from the stage were very enticing. They were the perfect choice to lead up to Hinder. 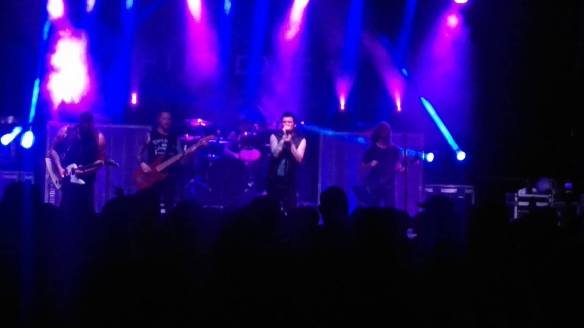 When Hinder hit the stage, the night truly engulfed us all, the stage was fully alive, and the crowd was ready for them. Hinder had a few technical issues due to the heat but that didn’t hold them back from going full force. The band rocked the stage with a mix of old and new songs and the excited crowd ate it up. The relatively new singer Marshal Dutton has grown on me and he did an amazing job of covering the songs from the first and second albums, and he gave the old songs new life and a surreal sound to them. He has a smooth voice that still has plenty of edge and roughness, but it’s not harsh. Marshall covered the tracks that Austin Winkler had originally done nicely. The guys did a few tracks from their As The Smoke Clears album and it was a seamless transition going from the old tracks to the new and back again. Marshall played a duo guitar solo and it was intense hardcore guitar action. All of the guys on the band performed perfectly and with energy and emotion. Marshall even did an acoustic song from their acoustic album. Some of the songs they played were “Intoxicated,” “Up All Night,” “All American Nightmare,” “Lips Of An Angel,” “Better Than Me,” “Two Sides Of Me,” “Hit The Ground,” “Rather Hate Than Hurt,” “Wasted Life,” “See You In Hell,” “Use Me, and “Get Stoned.” They also did a few songs from their new album The Reign. The guys put on a show to remember and all of the bands, not just Hinder were awesome. The strobe lights matched up to each and every song perfectly and seamlessly. It was one hell of a concert and to those who left early and to the ones who didn’t come out, you just don’t know what you missed out on.