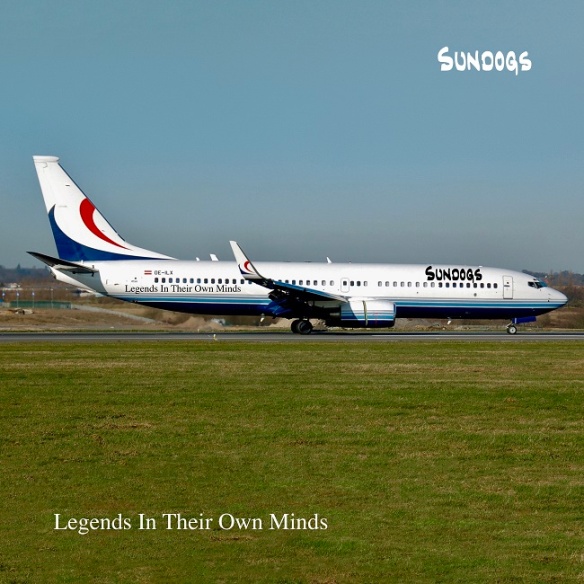 The Sundogs are a Seattle based band formed by Stan Snow and Jed Moffitt. Legends In Their Own Minds is their second video album and includes all original music written by Snow and Moffitt. Their music is diverse in style because Snow and Moffitt approach songwriting from different angles. This gives their music significant variation and they typically alternate tracks throughout the album. Each song is different. Their music is inspired by the days of classic rock and jazz fusion so this is both an audio AND video album. The videos were shot during the recording sessions using green screens, and all videos have CGI post-production.

Starting off with the single “Fallen Hero,” you definitely get that classic rock vibe and a damn good song as well. Catchy and tight playing really make for one heck of a beginning to the album. Next, you get some of that Steely Dan influence and the jazz feel with the terrific “Snowman.” This is a song that reminded me of the stuff I used to hear coming out of my older brother’s room back in the late ‘70s. With Snow and Moffitt switching from song to song, the variation of sounds is great and really gives you a nice mixture of styles and keeps things interesting. Stan Snow is a songwriter, producer, does vocals, guitars, etc…, and Jed Moffitt is a songwriter, co-Producer, also does vocals and keyboards, while the rest are studio musicians that they hire for the recordings and videos, but they are not “in the band.” This album has amazing production, the vocals for both singers are perfect for their styles and the playing is tight, but has a groove to it that really makes for a toe-tapping good time. I really can’t say anything bad about any of the songs; every one of them is great and could be a single.

Grab this album, turn the lights low and groove along to the mixed up sounds on here and smoke ‘em if you got ‘em…you know what I mean. If my brother was still here, this would be on his rotation, so for you Curtis, this is one that I will play for you, my brother.

The Naveblues are a band from Bergen in Norway that play a mix of indie rock and blues . The band features singer/songwriter Nave Pundik, who takes influences from rock, indie, alternative, funk and blues to create their own style and have been reaching an ever-growing audience.

This time out, they have recorded their take on Led Zeppelin’s “Thank You,” and given the song their own spin. The major difference is the harmonica being used in place of Jimmy Page’s guitar playing. That may be a bit of a shock since everyone is used to that being a major part of the song, but the harmonica is soulful, and gives the song a new texture and feel to it. Don’t think that there isn’t guitar in the song, there is and it’s sinewy and sounds great. The blues sound actually suits this song and gives you a chance to close your eyes and let the sound wash over you. The video is based upon the idea of what going to Mars would be like and staying there by yourself. It goes through the excitement and beauty of being there, to sadness and a realization that she is all alone on Mars.

The playing, the production, and the video are all excellent and show not only terrific chops, but that the idea of being a settler alone on Mars is portrayed perfectly. A great total concept, and one that I will be enjoying again and again.

The second and arguably, the best album from JEFFERSON AIRPLANE has been beautifully remastered with crisp sound and it fills in the spaces that were missing on previous releases. This is the first album to feature Grace Slick on vocals and has the top ten singles “White Rabbit” and Somebody To Love”, which became classics not just of the band, but rock’n’roll classics.

The mix of folk rock and psychedelia was original at the time with bands taking music into wild directions that were never thought to be put together in those ways before, but while some bands faded away, these guys put out a classic that still sounds fantastic today. The album goes into softer, folky songs like  “Comin’ Back To Me”, hard-hitting rockers like “Somebody To Love”, and the complete weird-out psychedelic track “White Rabbit” and flows perfectly. The music can still grip you and pull you into its weave of delirious excitement and that shows just how good of a band they were. The cleaned up sound makes the instruments sound a lot clearer and more powerful than before and you can really hear the emotion in the band’s performance. The packaging is impressive, a reproduction of the album jacket, a black CD that looks like the record did, and a cool OBI strip like they have on Japanese CDs.

If you are a fan, you need this album, if you are looking for the definitive album by them, get this one today. All of their first nine albums have been remastered and are out now on Culture Factory USA, get out your credit cards and grab them!

“This Is Rock’n’roll, Wankers!”  has riffs, keyboards, and vocals rousing up to the sky with anthemic might and an infectious melody. It is exactly what its title declares, a giant middle finger to people who have no idea what Rock’n’roll is and think that whiney, fake shit is rock. The track has a swagger and balls to the wall intensity which makes you want to get up and shout along and is a triumphant and irresistible start to the release. “Fly To The Rising Sun” has a great bunch of riffs that will make you close your eyes and get lost in them, thundering drums and the keyboard just adds the right amount of texture to the song. “Midnight Hour” has a thick bass, guitar playing that just seems to be from another planet with the intense riffs, and a bit of a classic rock feel to the song. “Could You Love Me” has a touch of AOR to it and would have sounded as great booming out of a radio in 1984 as it does now. “Wastin’ Miles” keeps the AOR sound going with this mid-paced track that makes you want to sing along to. “Church Of Clay” has some of the most impressive guitar playing on it and shows just how talented Bizzarri is, and is one of the high points on the album, especially when the keyboard solo comes in. “Mountain High” has the sound of early RAINBOW and is every bit the equal of the previous song and is another highlight. The playing on this album has been stellar and in a perfect world, this is what would be on the radio and selling millions of copies. The band shines on these tracks, giving the listener a chance to hear exactly what a band at the top of their game is capable of doing, laying to waste the crap surrounding them. “Cold White Love”, “A Spark From The Sacred Fire”, “Prince Of Moonlight”, and bonus tracks “Till It Bleeds” and “Broken Uncles Inn” rounds off what has to be my album of the year.

With this, you have an album sure to excite all melodic rock fans with the storm of rock’n’roll that is presented in this fantastic package that includes a cover from graphic designer Storm Thorgerson. Don’t let anything stand in your way, get this album, believe the hype this time because brothers and sisters, it’s true!

EASY COMPANY is a four-piece modern rock group from Glen Rock / Pequanock, NJ, and comprises of Adam Schlett on rhythm guitar and vocals, Bobby Weir on lead guitar and vocals, Tommy Scerbo on bass and vocals, and Jack Biamonte on drums and vocals. They had another EP released before this one and they are keeping the independent flag flying on this release as well.

This three song EP starts with “Side To Side” starts off with a flourish that brings to mind some of the classic rock from the early 80s and soon goes into a modern rock song with nods to the classic sound throughout with the thundering drums, the pumping bass, the great leads and the smooth vocals and was a great song to get you moving. “Molly” has a big sound, the kind of song that would sound fantastic played live in a huge venue with arms raised, people nodding their heads along to it and shouting along to it. “Old Friend” is a slow song that starts off quiet and then gets more powerful and you can hear the heartfelt emotion in the vocals, the band keeps the flow of heavier and softer playing in check and makes the lighter come out of the pocket, oh yeah, no one does that anymore, the cell phone out to light up the venue.

For a band that has only really been around for a few years, these guys have the sound of a band that’s been playing for a long time and sound magnificent. The playing is what really blew me away, everything was tight, the vocals were strong, the production was pristine and this really made me want to hear more from them. As a teaser, this is a great little taste that will make you hunger for more, I know that I need another helping of EASY COMPANY, you will too.