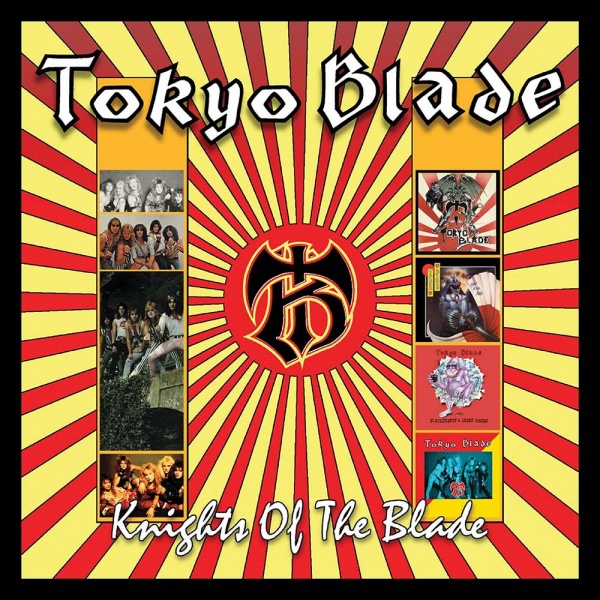 Tokyo Blade originally formed in 1982, releasing their self-titled debut in 1983. They formed around guitarist Andy Boulton, he was joined on their debut by Alan Marsh on lead vocals, John Wiggins on guitar, Andy Robbins on bass and Steve Pierce on drums, making a significant impact on the burgeoning NWOBHM scene that had been popularized by Iron Maiden, Saxon, Tygers Of Pan Tang and Def Leppard, as well as finding support in the pages of Kerrang! magazine. This release consists of a four Disc box set of their first three albums, many rare EPs, singles and non-album cuts from the early 1980s, including tracks from “The Cave Sessions”, “Undercover Honeymoon” 12”, “Midnight Rendezvous” EP and “Madame Guillotine” EP. Featuring lengthy and detailed liner notes from note NWOBHM and Tokyo Blade expert John Tucker

Tokyo Blade issued their debut recording in 1983, which was self-titled in the United Kingdom, and titled Midnight Rendezvous everywhere else. The album is classic metal with high-pitched vocals that aren’t too far into the stratosphere like some bands, they are a nice mix of highs and mid-level, the guitar rips throughout the album, the drumming is powerful, and the bass is heavy. The band really sounds like they were having a great time n the studio making this album, with youthful exuberance just dripping from the songs. The songs are catchy and should have been playing out of everyone’s speakers loud. I really liked “Powergame,” “Break The Chains, ” Killer City,” “Liar,” and “Sunrise In Tokyo.” For a first album, you don’t get much better than this.

The Night Of The Blade album arrived a year later, Andy Wrighton having replaced Robbins while Marsh had also left the band. The band was trying to find a new singer for their tour and got lucky with what was supposed to be the temporary throat of Vicki James Wright, but they decided to keep him as singer for the next album. His vocals were a bit more commercial sounding, but the songs were still hard and heavy. Again, the band played tight and really matured since their first album. Songs “Someone To Love,” “Night Of The Blade,” the killer “Rock Me To The Limit,” “Love Struck,” and the more commercial sounding “Lightning Strikes (Straight Through the Heart),” stand out after all of these years.

Blackhearts & Jaded Spades retains the power and singer from the previous album and sounds a bit more polished, but not wimpy. You could hear the band moving towards the huge American market with the added keyboards and more melody than on previous albums. Who can blame them? The market in America was something that pretty much every band wanted to break in and tour and be played on MTV during this period. The hard and heavy stuff was more on underground radio and bands knew where the money was; playing more melodic, adding a touch of keyboards and making the band more in tune with the big bands at the time like Iron Maiden, and Motley Crue. “Dirty Faced Angels,” “Make It Through The Night,” “Always,” are a trio of killer songs, “Loving You Is An Easy Thing To Do” is a blues based track that has a fantastic groove and should have been huge on the radio, “Undercover Honeymoon” gets things back a little heavier, then you get the power ballad “You Are The Heart,” which I could see being thrown in the mix at a high school dance back then, “Blackhearts And Jaded Spades,” “Tough Guys Tumble” get the hard rocking going again, until you come to another power ballad, “Dancing In Blue Moonlight,” which now starts to be a little much, and happily, they end the album with two blistering songs “Playroom Of Poison Dreams,” and “Monkeys Blood.” Not perfect, but still a great album that has more than enough metal to make you happy.

The fourth CD is a nineteen track collection of the band’s singles and EPs.  All of these songs were previously issued on the band’s various reissues, and it’s great to have them all together on a separate disc. This ably illustrates the musical evolution Tokyo Blade underwent from the start of the career, until their third album. Going from a harder sounding band to a more slick and commercial sound, while still retaining the great songs and playing that made you pick up the first album.

With the great liner notes, replica album sleeves and the fantastic music on the four discs, you really can’t go wrong with this purchase. The band definitely is on fire on these albums and even though they still are putting out albums now, the young, hard-edged sound of their hunger is a treasure to behold.