For this record, Pop collaborated with Ivan Kral, who is best known as the guitar and bass player for Patti Smith in the 1970s. When Arista heard the album, they brought in former Monkees producer Tommy Boyce to remix “Bang Bang”. According to Iggy Pop’s autobiography I Need More, he wrote “Bang Bang” because Arista Records wanted a single and he promised them a commercial album. Party was released in June 1981 and it peaked at number 166 in the Billboard Top 200. “Bang Bang” was released as a single the same month, charting at number 35 on the Billboard Club Play Singles Chart.

The album starts off with a delightful and fun track called “Pleasure” that showed that Iggy still had some of the old darkness in him. “Rock And Roll Party” is an upbeat track that leads into the oddly named, but good track “Eggs On Plate.” “Happy Man” is a great track and is one of my favorites on the album along with the following track, “Bang Bang,” which was later covered by David Bowie on this 1987 album Never Let Me Down. There is also o pair of cover, “Sea of Love” and “Time Won’t Let Me,” which are good, but not essential. The band plays well and you can hear that they are giving their all to this album. With the great packaging and the remastered sound, it’s great to get another chance to reassess this album and realize that it’s nowhere near the mess that people said it was back when it was first released.

Maybe not a classic, but still an album to add to your collection and enjoy when the mood hits you to hear something a bit different from Iggy.

For this album, Iggy collaborated with ex-Sex Pistols bassist Glen Matlock. Ex-member of The Stooges James Williamson was originally hired to produce the album, but a conflict between Williamson and David Bowie (who was assisting as a friend of Pop) over recording techniques led to Williamson walking out on the project. David Bowie and Simple Minds provide backing vocals on “Play It Safe”.

On this release, Iggy brought in some of punk and new wave’s finest—Glen Matlock (Sex Pistols), Steve New (Rich Kids), Barry Andrews (XTC, Shriekback), and Ival Kral (Patti Smith Group) to back him up. “Loco Mosquito” is a strange keyboard driven upbeat rocker that is catchy as hell. “Ambition” is an upbeat rock song with an acoustic guitar with eerie atmospheric organ playing that sounds great. “Knocking ‘Em Down” is a heavy guitar driven rocker that is super catchy. “Play It Safe” is Iggy’s sole collaboration with David Bowie on the album as is a slower song about music not being challenging. “Get Up And Get Out” is another slow song with a lot of horns which gives it a jazzy feel to it. “Mr. Dynamite” has piano and horns that add nice layering to the song. “Dog Food” is a great upbeat punk rock classic. “I Need More” is another classic song with great music, great lyrics and is one of the best songs on the album. “Take Care Of Me” has a mix of power pop with a touch of a ballad mixed together. “I’m A Conservative” has Iggy mocking conservatism and is a mid-tempo guitar driven rocker. “I Snub You” is another upbeat punk rock song. The album’s sound has been cleaned up and sounds crisp and makes it easier to hear the energy that the band has on this album. The packaging is great, with the replica sleeve and the lyrics printed and look and feel of the original album.

As always, this is Iggy, so you know there are going to be songs that you like, some you love and some mediocre, but still, it’s a lot of fun and worth grabbing. Get your Iggy collection filled in with this album that isn’t hyped up like a lot of his others and discover something different from Iggy.

New Values is the third solo studio album by Iggy Pop and his first record since The Stooges’ Fun House and post-Stooges Kill City without any involvement from David Bowie. New Values was originally released in April 1979 by record label Arista. Although well-received critically and now regarded as one of Pop’s best solo efforts, the album was not a commercial success, only reaching number 180 in the Billboard Top 200 album chart.

New Values a cleaner, slicker production than its immediate predecessors, something that adds to the slightly different sound Iggy was showcasing on this album. “Tell Me A Story” has female backing vocals, some synth sound effects, a laid-back guitar solo and puts Iggy’s vocals front and center. “New Values” features a vocoder, and has a punky riff that gives the song a nice edge to it. “I’m Bored” has a catchy angular guitar riff, a great beat and humorous lyrics, having him proclaiming himself to be “Chairman of the Bored.” “Five Foot One” is a powerful rocker with horns, animalistic howling and ironic lyrics. On “Don’t Look Down” and “Endless Sea” things get a little more epic with Iggy giving a great vocal performance. Though Iggy’s not really known for his romantic side, “Angel” has to be one of his best ballads. The band plays tight and with energy and makes for a pretty damn good listening experience.

Yes, it’s not as hard or punk sounding as previous and later albums, but damn…it’s Iggy and it’s a good album with fun songs and a couple of classics to boot. The remastered sound and the great packaging really make this a standout CD to add to your Iggy collection. 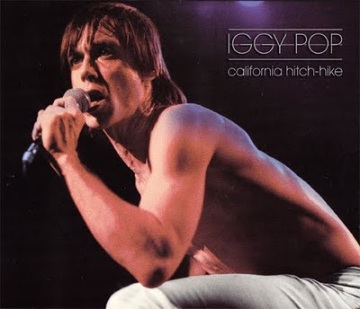 With THE STOOGES, Iggy Pop helped create punk rock  and after being ignored by most music fans before punk, by 1979 he was getting recognized for all the great music he was a part of and had a band that included punk veterans Brian James from THE DAMNED, Glen Matlock from THE SEX PISTOLS, and Ivan Kral from THE PATTI SMITH GROUP, along with Klaus Kruger from the definitely un-punk TANGERINE DREAM. This is compiled from two of the four dates performed at the Old Waldorf in San Francisco and has a completely unheard track, “Hitchhiking in California”.

These sixteen tracks came at a time where punk and new wave were getting recognized by both the public and the media around the world and Iggy was getting ready to release what he was hoping to be the album that would put him over the top, the relatively bland Soldier album and went out on the road to try out the songs on the unreleased album. The songs from that album actually have meat on them on this live recording, “Take Care Of Me”, “Dog Food”, “Play It Safe”, and “Knocking ‘Em Down (In The City)” all have the energy and enthusiasm that was missing on the studio versions. The now classic songs like “TV Eye” , “Real Cool Time”, “I Wanna Be Your Dog”, “No Fun”, and “China Girl” are amazing and full of the piss and vinegar that you would expect from this band. The unheard track “Hitchhiking in California” is an interesting spoken word track with synthesizers and the band sounding like they are doing an improvisational background. Add on a pretty good version of THE KINKS “You Really Got Me” to the mix and you’ve got a live album that actually makes the other live releases sound lousy in comparison.

This also comes in an elongated slipcase, has a postcard of Iggy and his band, a booklet with sleeve notes, an interview with Brian James, and many colour and black and white shots from the shows. From the quality of the package to the great job on the sound, this is a release that you need to pick up and hear what Iggy was trying to get across to the public, but never got it right until a little later in his career on records.