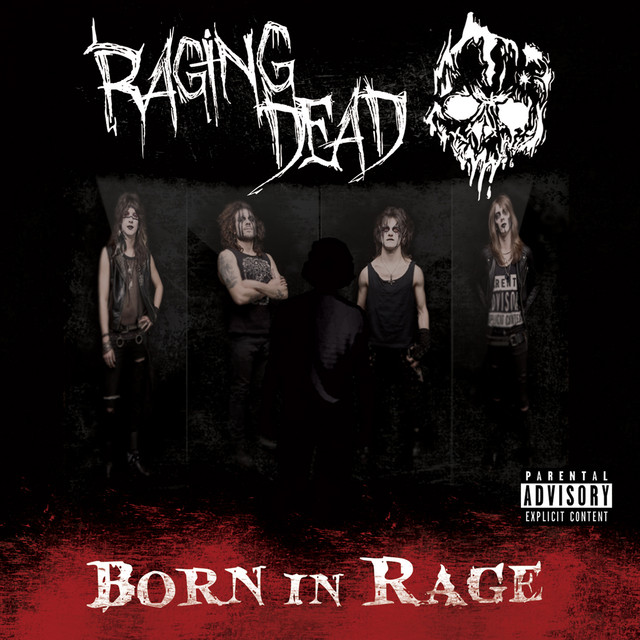 Based out of Birmingham, West Midlands, UK; THIRTEEN SHOTS have just released their sophomore album of horror / garage rock with a touch of rockabilly thrown in. These nine tracks are made with passion and enough energy to light up Times Square for a week.

The opening track “Death Jam 2000” kicks off with the sound of cheering fans and an announcer introducing the band before the music kicks in and it’s a catchy song, combining horror punk / psychobilly with some hard rock mixed in and holy hell…it works! “Zombies From The USSR” is a great garage rock song that will get you up and boogieing around your house and it will infect you with its infectious disease and turn you into a THIRTEEN SHOTS zombie fan, not looking for brains, but for all of their hooks to feed you. “‘Bewitched” is a horror punk song with heavy bass, and frenetic drumming, great riffs, and the howling vocals make this one a lot of fun. “Psycho Jukebox” starts off with an early rock’n’roll guitar lick then the song mixes a touch of ska and surf rock to make a catchy song with a great chorus. “Get In My Crypt” is a super hard-hitting song that name checks Dracula, has a killer guitar solo, and super thick bass mixed with pummeling drums. Listening to this album is like being a kid and going to an all day horror movie fest, showing the classic and sometimes cheesy movies from the ’50s and ’60s. There are a lot of styles mixed together on this album and everything flows together perfectly, making the album sound more varied and interesting than others who are playing in this genre. John  on vocals, Izzy on guitar and backing vocals, GMT on bass and Chelsea on drums really play with not just power, but with finesse and true love for what they are doing and it shows on every song. “Nekro-Sexual”, my favorite song with the classic chorus of “Stomp on my balls!” is fantastic, and “Tales That Start With A Whisper” is nice and gritty and ends the regular album perfectly. The last two songs are live and they sound like they were recorded in the audience which is a shame because the band is so good that the songs take away a bit of the excitement that the rest of the album has. They do give you an idea of how good they are and that if they come around, you had better get out and see them.

THIRTEEN SHOTS have released an album that shows the pretenders just what a band on the top of its game can do, kick your ass and rock your balls off! This is an album for psychobilly, horror punk, and people who just love good music fans.

These fifteen songs by this hardcore / horror / punk / metal band came at you with anger and venom being spat out and followed by a punch to the groin for extra effect. They come from the bowels of New York City and with a name like CHESTY MALONE AND THE SLICE ‘EM UPS, you know that they had better come through for you, and they do with all aspects of the name.

If you’re looking for sweet and polite music…next! I’m glad that I’m not down for that crap and really dug this album with its crazed playing, strong vocals from Jaqueline Blownapart and catchy songs. “Protest The Unborn” is a great track with gang vocals and ripping guitar playing, “Primordial Times” is a super fast hardcore track with the band just this side of out of control, but just barely and Blownapart’s manic vocals adding to the fun insanity, and”Bloodthirsty Hungry and Mean” keeps the angry and blistering speed going. This is going to be a lot of fun when only a few tracks in, you want to crank it up and start slam dancing and make this a permanent fixture in your music playing device. Other songs that grabbed my were “Filtheater” which reminded me a bit of THE PLASMATICS, “The Brain That Ate New York” with it bringing a bit of FEAR to the plate, “My Favorite Things” is one riff heavy gore fest, “Brainwash Cocktail” with great gang vocals, “Quest For Flesh” is one fantastic hardcore song with a blistering performance that just threw me against the wall with its intensity, and “Panic At PT. Doom” with the throbbing bass line and fast guitar leads. The album is bookended by two instrumentals that give you a great start and finish to the frenzied collection of songs on this album.

I was hoping that they could keep my interest for an entire album, and they sure did, from the great pics of Blownapart in the booklet, her incredible vocals and the band playing like their lives depended on it, you can’t go wrong with this album. I’m totally looking forward to their next full release and would love to see them live sometime.