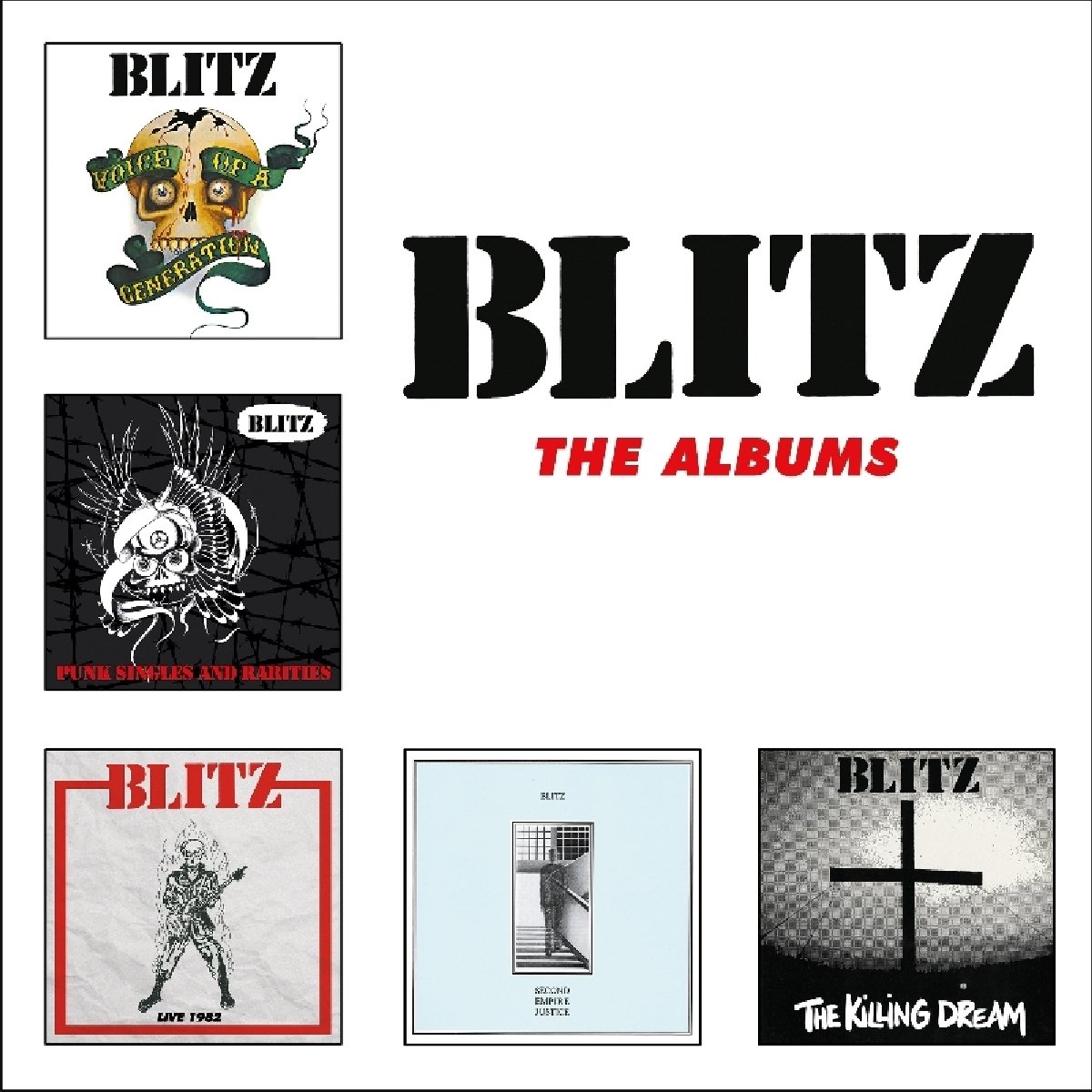 Blitz was a street punk/Oi! band from New Mills, Derbyshire, England, formed in 1980 producing albums until 1983. The band signed to No Future in 1981, and their first release was the 7″ EP All Out Attack. Their debut album Voice of a Generation received a five-star review from Bushell in Sounds. The original Blitz lineup consisted of Carl Fisher (vocals), Charlie Howe (percussion), Nidge Miller (guitar), and Neil “Mackie” McLennan (bass). After Fisher and McLennan had a disagreement, Fisher and Howe formed their own band. In 1983 they produced Second Empire Justice on the No Future label with Tim Harris (guitar, keyboards), crediting Mackie. Because of its departure into post-punk and new wave characteristics it did not do well with the original Oi! audience. The album was commercially unsuccessful at the time, the No Future label sank, because Blitz was their main income and with it the Fisher and Howe arrangement. According to Miller, the band split up, because the original members had no interest in “touring, plus they were never really into the music.” It was Miller alone who produced the 1989 album The Killing Dream playing all instruments (guitars, bass, drums) with Gary Bassnett on vocals. This 90 track, 5 disc clam shell box set features everything released by Punk legends Blitz. The 20 page booklet comes complete with detailed liner notes, pictures of all relevant record sleeves and memorabilia and clippings from the era.

I remember hearing the classic “Someone’s Gonna Die” and couldn’t believe hav much I loved it and how thick it sounded, like a jet-liner taking off in my face, I knew that I needed  more from this band. Disc 1 is the seminal Voice Of A Generation album which hit No.27 in the UK National Charts as well as topping the Independent Chart. This album is fantastic with songs like “4.Q.,” which lept me coming back to it year after year, and playing it for anyone who would listen. A great debut that retains the pure power and force that makes it stand out from the pack. Disc 2 is a 29 track collection of non LP singles, B-sides and compilation cuts that was mostly the way a lot of people, myself included heard Blitz mostly. Back then, compilation albums were a great way to hear bands new songs, rare songs and get people to pick up their own releases. This CD is chock full of fantastic songs and will be stuck in your player for hours. Disc 3 is a rare In Concert live recording from 1982. This is an amazing in your face concert showcasing the band playing their hearts out to an appreciative crowd. CD 4 is the No.5 Indie Chart album Second Empire Justice which now features the “Telecommunication” and “Solar” singles as a bonus. This is the album that the older fans just shook thier heads at, “where was the punk, the fire?” The band took a lot of stick for coming across more like Joy Division than the old punk band that they were, but they still had great songs and the album sounds good in the light of years passing. Lots of hooks, and the lyrics were still on point, just let yourself relax and enjoy it. The fifth and final disc is the band’s album from 1990 The Killing Dream, now restored to its original track listing and running order. With a drum machine and still sounding like a post-punk album, it has some good moments, but isn’t the punk powerhouse that people might have been expecting. It still has enough interesting things going for it that I enjoyed it more now than I did back when it came out.

Having this great band collected is such a treat and will keep you happy for hours and hours, just keep an open mind. his is the definitve collection of a vital band that more people need to hear.