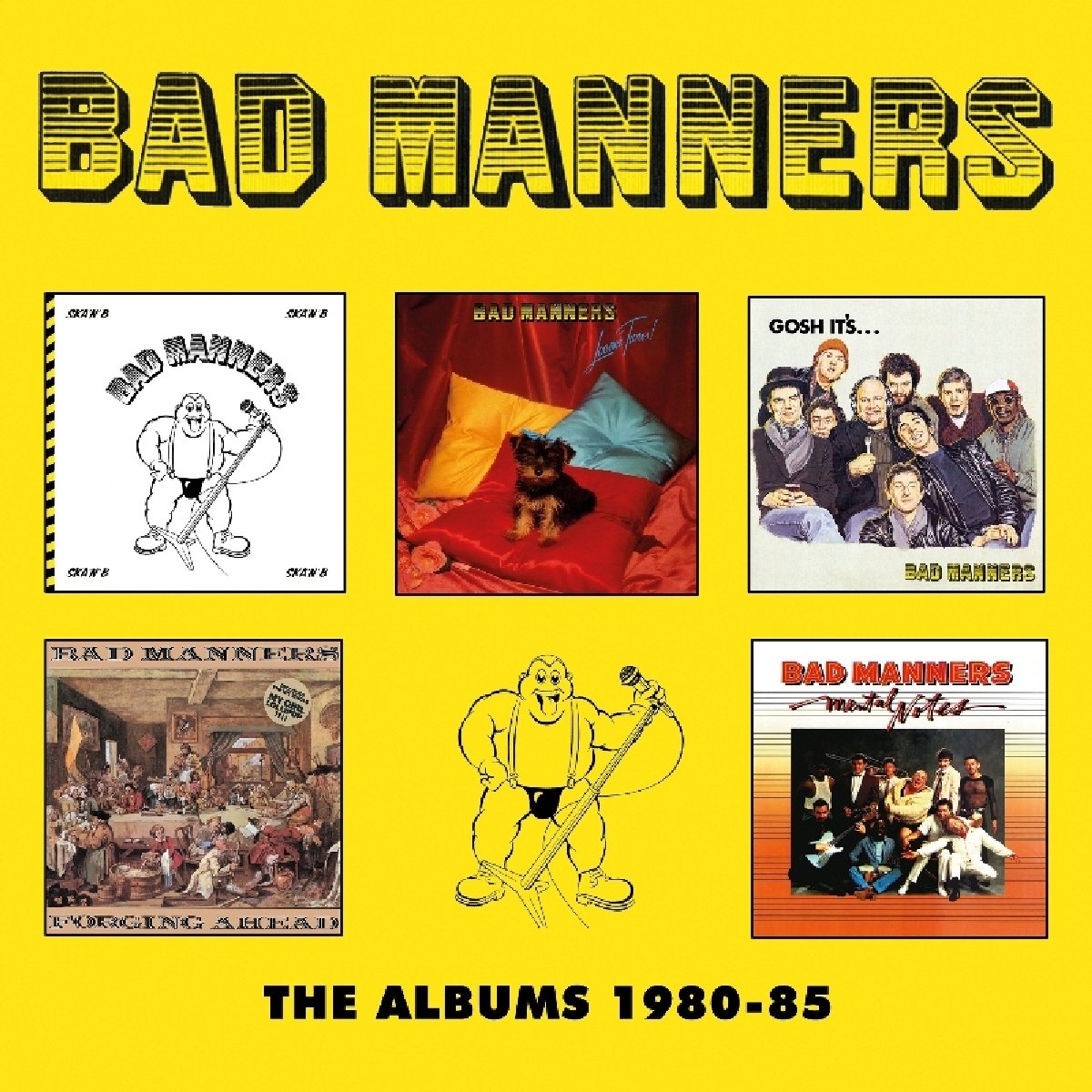 This collection is a 93 track five-disc clamshell box set rounding up pretty much all of Bad Manners’ releases between 1980-85. As well as having remastered sound, the 20-page booklet contains detailed liner notes, pictures of all the relevant record sleeves,
memorabilia and press clippings from the time.

Fronted by Buster Bloodvessel (born Douglas Trendle), the band was formed in 1976 while the members were together at Woodberry Down Comprehensive School near Manor House, North London. They rose to prominence in the early 1980s as part of the ska revival spearheaded by the likes of The Specials, The Beat, Madness and The Selecter. Unlike those bands, they were never on the 2-Tone label, but they did feature in the 1981 documentary Dance Craze which is where I first heard them. Their live version of “Lip Up Fatty” was amazing and I was a fan from that moment on.

The first CD is debut LP Ska ‘N’ B which spent three months in the UK charts in 1980, peaking at No.34. Includes the hit singles “Ne-Ne Na-Na Na-Na Nu-Nu” (No.28), “Lip Up Fatty” (No.15) and “Special Brew’ (No.3).” The album is half covers and half originals, and contains Bobby ‘Boris’ Pickett’s “Monster Mash,” the Magnificent Seven theme song, and Sam The Sham & The Pharoahs’ “Wooly Bully.” This album is fun and a great listen even after all these years, and it features five bonus tracks culled from 7” and 12” releases of the time. CD number two is the Loonee Tunes album which hit No.36 in the National Chart in 1980. This one contains the hit singles ‘Lorraine’ (No.21) and ‘Just A Feeling’ (No.13). This one had more originals and helped get the band more visibility with more TV appearances. Gosh It’s album is what you’ll find on Disc 3. It reached No.18 in the UK charts helped by the inclusion of the hit singles “Can Can” (No.3) and “Walking In The Sunshine” (No.10). Also added as a bonus is the No.34 charting “Buona Sera” single plus two tracks from the Party Party soundtrack that are appearing on CD in the UK for the first time. This is the album that really made it for the band with even better songwriting and production. I played this one a lot and you will too! The fourth disc is 1982’s Forging Ahead LP, a No.78 chart entry that includes the hit singles “Got No Brains” (No.44), “My Girl Lollipop” (No.9), “Samson And Delilah” (No. 58) and “That’ll Do Nicely” (No.49). This version includes 10 bonus tracks, lifted from various single releases. This album deserves to be heard since it contained so many great songs, but with ska going down in popularity, it didn’t get the respect that it deserved at the time. Disc 5 is the ultra-rare Mental Notes album from 1985, originally only released in North America / The Netherlands / Australia & Greece. Amongst the ten bonus tracks are five that have never appeared on CD before, culled from rare American only 12” singles. I owned this album because I lived in Canada at the time and played it frequently since I wasn’t too bothered with trends and still liked ska. The album went against their previous ska sound, but still was a pretty good album, especially their cover of Todd Rundgren’s “Bang The Drum All Day.”

All-in-all, this is a great collection for someone who loves 2-Tone and wants to put a smile on their face. The band is and will always be fun and talented, something that we need more of these days.

The longest running ska band of the 2-Tone era has put out this long-awaited reissue of their rarities collection and it is being reissued in its original U.S. sleeve, and features original and rare studio recordings that was originally released back in 1997. This release features the extensive sleeve notes from that American release, and the tracks were taken from Buster Bloodvessel’s personal vaults.

What a treat to hear songs that were too weird or out-of-place for their albums, and that’s amazing considering the crazy tracks that have been put out by them in the past. Some songs Like “Jezebel” would never have fit onto one of their albums, especially that one because it sounds nothing like them and would fit in with the pop music that was around back in 1983. It’s not a bad song by any means, it’s really quit good, just too out of the ordinary. “Boots” is their take of the song popularized by Nancy Sinatra, and a damn fine song too. Catchy, fun, and a ton of fun. The song “Devil’s Dub” is a fantastic dub mix, nice thick bass and a groove that won’t quit. “Double Barrel” is a great ska/reggae song that makes you want to dance to. “Help Me” has a great beat and is one of my favorite songs on here. “Elizabethan Reggae (Original Version)” is one song that I can play over and over again. just a classic tune. “Night Bus To Dalston (Original Version)” is taking the piss out of Madness’ “Night Boat To Cairo,” but is an ace tune all on its own. It will get you dancing around your home.

Fronted by Buster Bloodvessel (born Douglas Trendle), this ska band was formed in 1976 while the members were together at Woodberry Down Comprehensive School near Manor House, North London. This deluxe edition of this classic 1989 album is packaged as a digipak with picture disc CD and booklet. This was their sixth album originally released on Bluebeat Records in 1989. The album features the indie hit singles “Sally Brown,” “Skaville UK,” and the UK Top chart hit “This Is Ska.” Added as bonus tracks are the B-sides to the singles that were taken from this album including their respective 12” single mixes, plus live favourites like the title track, “Bonanza Ska,” and “Rosemary.”

On this album, Buster has assembled an energetic and highly entertaining collection of ska music that will have you (and maybe your neighbors) skanking from start to finish. “Skaville U.K.” is a rousing opening number which will get you up on your feet, and dancing all over your living room. As soon as you hear it, you’ll be singing along with “Sally Brown,” one of the best songs they’ve ever done. “Bonanza Ska” is a hilarious song, incorporating ska renditions of several well-known Western TV / movie themes.”Buffalo Ska” has a bit slower tempo, with an amazing trumpet solo. “Rocksteady Breakfast” has a nice reggae sound to it. Originally a compilation song, “Baby Elephant Walk” is an infectious instrumental which sounds gets your feet tapping. Add to this the great remixes, especially “Sally Brown,” which is even better in the remix, plus the great remastered sound, the interesting, and informative liner notes, what a great release.

Bad Manners was never the thinking person’s ska band, they just wanted to have fun, and have their listeners join and smile. This is one band that never falters, they just kick you in the ass and make you dance, so do yourself a favor and put this in your CD player, and try NOT to skank – I DARE YOU!