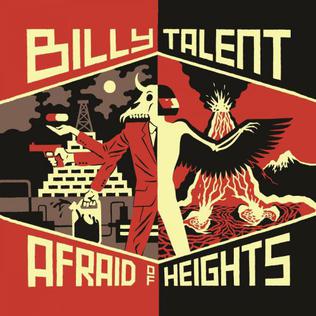 Billy Talent is a Canadian rock band from Mississauga, Ontario. They formed in 1993 with Benjamin Kowalewicz as the lead vocalist, Ian D’Sa on guitar, bassist Jon Gallant and drummer Aaron Solowoniuk. Aaron is currently taking a hiatus from the band due to an MS relapse, Jordan Hastings from Alexisonfire, Cunter and Say Yes is currently filling in for him. The band existed for almost a decade before mainstream success. The members met and played in Our Lady of Mount Carmel Secondary School under the name Pezz and renamed itself Billy Talent after running into legal trouble with the old name. Afraid of Heights is their fifth studio album and is their first album in four years following 2012’s Dead Silence.

Well, they have gone more political on this one with “Big Red Gun” and “This Is Our War” having more than a hint of questions about what the hell the Americans are doing nowadays. Of course being Canadian, there has always been an eye at what the southern neighbors are up to, but now it’s getting a bit more strange and dangerous than before and being an outsider is a good place to be. A few fist pumpers on here, such as “Ghost Ship Of Cannibal Rats, and “Louder Than The DJ” will sound great mixed into their live set with their catchy choruses. The band seems to be playing their collective hearts out and have a lot to say on this album, so read those lyrics kids! The playing is tight, with thick bass lines, powerful drumming, slick riffs, and the shouted vocals that combined make for a great listen.

If you are a fan…..what are you waiting for…….an invitation? If you are curious, grab their best of album and this at the same time, that way you can hear where they came from and where they are today. If you want music to make you think as well as rock out to……this is your album.