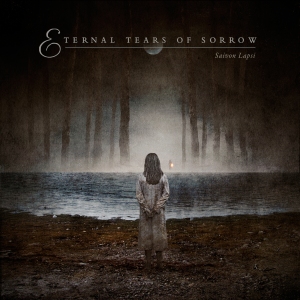 ETERNAL TEARS OF SORROW was formed in 1994 and this is the new and seventh album by this Finnish melodic death metal band that incorporates symphonic metal into the mix.

The album starts with “Saivo”, an instrumental of synthesizers and it flows perfectly into “Dark Alliance”. The song starts off with heavy guitars and epic keyboards, heavy guitars, and clean and growled vocals. “Legion of Beast” raises the stakes in  tense melodic death metal and passionately rasped vocals from longtime growler and bassist Altti Veteläinen. “Kuura” is an acoustic instrumental that meshes well with “Dance of December”, a track with gothic overtones and plenty of dramatic vocals and fantastic guitar playing by both Jarmo Puolakanaho and Mika Lammassaar. On this album you also have clean vocalist Jarmo Kylmänen whose vocals are powerful when they are present either in the pre-chorus or the chorus itself, keyboardist Janne Tolsa brings out the epic nature of the music, and drummer Juho Raappana who does a great job being the backbone of this album with his intense drumming. “The Day”, “Sound of Silence” has great dual vocals by Kylmänen and Miriam Renvåg, “Swan Saivo”, and “Blood Stained Sea” were all songs that got repeat plays on this album.

Excellent musicianship, and the captivating solo/lead work will make this a great purchase for those into this genre of metal. The contrasting vocals also added a nice change of sound within the album and within the tracks themselves. This is a solid symphonic metal effort.