I had the great pleasure to do an interview with Alexis on bass guitar in Quebec’s KAOTIK, a death metal band that has been around since the end of 2007. They have two releases out and the newest was reviewed here https://alteredfrequencies.wordpress.com/2013/03/04/kaotik-starving-death-cd/ so you should go out and grab a copy.

What/who got you into metal at first?

As far as I’m concerned, I first got into punk music when I was still a boy. After some time somebody introduced me to heavier stuff like Slayer. It went on from there, with classics like Maiden and Priest.

What styles/types of metal did you listen to at first and do you still listen to those types/styles today?

I would say mostly thrash metal. I didn’t discover death metal yet, and I was quite never into black metal, so you could say that thrash is what started it all for me. Bands like Slayer, Megedeth, early Metallica, Kreator, Sodom.. those guys were there from the start!

I’ve been in a few bands in my teenage years, before I joined Kaotik in 2009. There was a hard-rock band called Jackhammer, a blues-rock-garage cover band called The Smokin’ Suns, an all-Iron Maiden cover band called TailGunners (we did over 35 Maiden songs back then!!), and a heavy power metal band called Tales of Destiny. Tales released an album called Reign of the Eclipse, you can check that out online!

We all kinda known each other, because we all come from the same area near Quebec City. Fred and Sam had the idea of starting a band when they met at a Helloween/Gamma Ray gig in Quebec. Actually we were all there that night. I guess it is where it all began.

Well, Sam is working in a human resources department in a food company (he’s our office guy..!). Jeff, Fred and PL are in construction business. Jeff is in a workshop that produces doors and windows, Fred is a drywall finisher (drywall taper), and PL is an electrician. As for myself I am studying jazz music at Université Laval in Quebec City.

Everybody give their ideas, but most of the music is produced by Fred, and most of the lyrics are written by PL and/or myself.

Most of the time, Fred comes up with an idea (or many, many ideas..) and we work it together, modifying it and adapting it to other riffs. We work out a song structure until we are satisfied with the result. After that we do a low-quality record of it, so that PL or me can bring it home and work on some lyrics.

We write mostly about life after death, human insanity, creatures from beyond, and war. Those are the subjects that we like and that’s all there is about it !

How long are your tours?

We never really toured! We are really looking forward to it though.

We did play a lot in the area of Quebec City. We also played in Montreal, Rimouski, Lac-au-Saumon.. 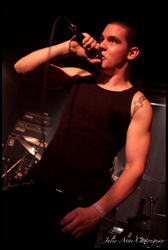 Hard question! Must have been at our album release party in Quebec City, with a great death metal band called Sick! Check them out on Facebook! https://www.facebook.com/pages/Sick/55928534369?sk=wall

2 times a week. 1 night of writing/jamming new stuff and 1 night of rehearsing.

We used to, but not anymore. Back then we did Out of the Body from Pestilence and Solid State from Obituary. We also did Isolated from Morgoth, but never played it live.

From the album Starving Death, I would say that Creature or Inbreeding are my favourites But I have to say that our new songs are pretty kick-ass and funnier to play! Better check out our next album! 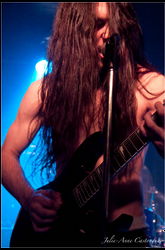 Any violence/bad attitudes from so-called fans?

Violence and bad(ass) attitude in the moshpit is what we get all the time live. Beside that, not that I can recall.

Do you know the brewery Unibroue? They make a lot of awesome beers like ‘Maudite’, ‘Fin du Monde’, ‘Blanche de Chambly’.. Those are my favourites. I also enjoy Guinness, Kilkenny, Pabst Blue Ribbon, Black Label, Moosehead And Bombay Saphhire Gin of course.

How long did the recording of the CD take?

About 40 hours if my memory is correct.

Jeff, our drummer, was really fucking sick because of the cats that were in Franky’s house (our engineer and sound technician). We had to get the cats out to record the drums, but it really was a pain in the ass for Jeff.

Stories about the songs on your CD?

They all have their little stories Some of the titles were changed in the progress, songs were modified, ect…

Sure! We are now working of some new stuff. Actually the writing process for our second album is almost completed and we are really looking forward to hit the studio once again!!

Via Massacre Records, eBay and via iTunes: Our debut album STARVING DEATH
or Directly on http://www.kaotikmetal.com

Yep, just hit http://www.kaotikmetal.com  to check out our merch!

Always do what we like best: groovy death metal with an old-school feel.
If possible, tour Europe and the U.S.
And of course, release some more heavy records to spread our name on the planet.

Any causes you’re into?

Any funny or strange stories from your last tour?

On our way to a festival in Halifax (a 13 hours ride from Quebec, which we never did in the end), we did a barrel roll with our van in a fucking blizzard. Nobody was injured during the experience though.. plus the van works just fine and the gear is top-notch!